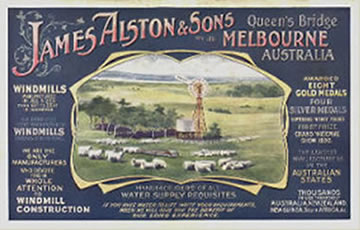 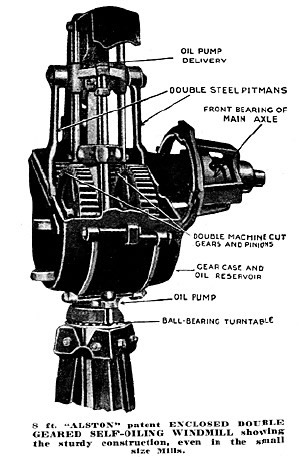 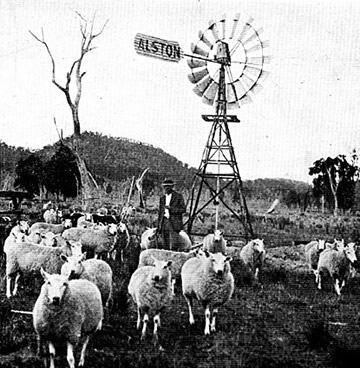 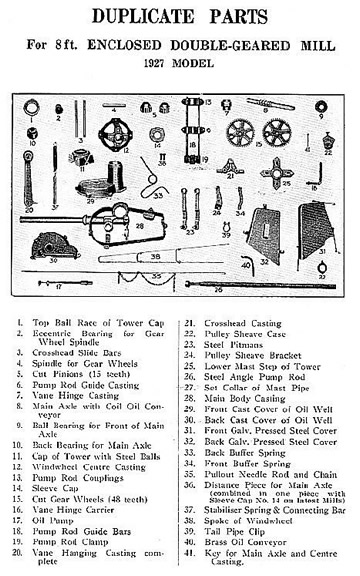 James ALSTON was born in 1850 arrived in Australia from England with his parents in 1861. He served a 4 year apprenticeship in the iron trade. During  1874 he established a business in Warrnambool, Victoria, operating as a blacksmith and agricultural machinery manufacturer.  Some of his earliest patent's for windmills were issued in 1884. The earliest known patent illustrations show an all metal  open wheel type of mill.  Then in 1886 he patented an all metal windmill with a modern multi sailed wheel. By 1890 hundreds of his windmills were operating in the western districts of Victoria alone and he was well on his way to dominating both the Australian and South African windmill market.

By 1924 there were over 50,000 Alston windmills in use. In the last known issued catalogue for "JAMES ALSTON AND SONS" c1930 he claimed that he was the originator of the all metal curved windmill blade and it would appear that there is some justification for this view.  His own slogan of the period was " I make windmills a special line, not a side show".

Alston's for much of the life of the company until the outbreak of World War II held the lions share of the Australian windmill market and also exported to countries such as China, India and parts of Africa. James ALSTON's last known windmill related patent was issued in the mid 1930's, but after he died in 1943, the company went into gradual decline, becoming moribund in the 1950's until about 1960 it went into bankruptcy.

1927 ENCLOSED DOUBLE GEARED WINDMILL
This windmill is a later example of the first of the conventional double geared oil bath windmills produced by the firm of 'James Alston & Sons PTY LTD'. It is probably also the earliest of this type of mill produced in Australia. The only other similar windmill which ALSTON may have seen prior to this is the 1915 Aermotor, which presumably came to Australia from the USA in that year. If that is the case however, James ALSTON being the innovator he was, came up with a very different design.

The windmill, apart from the gear box, drew from existing Alston design, so the tower fittings are for a standard mast pipe as used by earlier models like the 'Double Crank' or the 'Gearless'. The wind wheel and tail are also out of the parts box.

An unusual aspect of the design is the oil sump, which is cast in three pieces that are then clamped together into an oil tight unit by the use of exterior bolts. The central casting also held the mast pipe. It continued upwards to the top of the head where its strength was required to hold the tail spar hanger. Other company's mills with support for the spar mounted lower did not require that sort of strength and could use a light metal helmet. The tail hanger arm in the 12 and 14 foot versions was a reinforced triangle instead of the single cast arm used for the smaller mills. ALSTON fitted a pair of tin covers either side of the central casting. The working parts of the mill could all be removed without breaking the joints in the sump. In the case of the hub shaft assembly including the bearings and the pinion gears, all that was required was to unscrew the cap on the nose casting and release the grub screw on the centre bearing.

There are a number of quite interesting aspects of this design which are worth looking at. Ball bearings were used for the turntable and for the hub shaft. There is an adjustable plunger oil pump fitted into the crosshead which was used for all sizes. An eccentric bearing, that is set at the factory, locks into place to position the main gear shaft. All gears were machined.

It was originally known as the 1916 model, although it may have only come on the market in 1917. By 1918 this mill was marketed with 8, 10, 12 and 14 foot wind wheels and at that time the smaller two had a choice of 125 or 175 mm strokes, while the larger sizes were equipped with 175 or 225 mm strokes. Both the 12 and 14 foot mills are grouped together in parts illustrations and as the 14 foot mill is sometimes referred to as a "light" mill this may indicate that the same gearbox was used for both wind wheels. The 10 foot was geared at about 3.24 to 1 and the larger mills at 2.9 to 1.

The '1927' windmill (clearly marked on the casting) is actually a revised version which came out long after the original 1916 model, although it may be a variation on what is known as the '1918' model. The basic concept remained the same for all versions, but in the latter two a single pair of guide rods ran through holes bored in the crosshead. The original '1916' versions used a roller on either end of the cross head. Two flat iron guides were bolted on both sides of the central casting to guide each roller. The '1918' model had another change in that it used a nose bearing similar in design to the rear hub shaft bearing. Later when the 1927 version came out, it was equipped with a roller bearing in the nose and had the option of 6, 7 and 8 foot wind wheels. Both of the above only had allowance for a single pump stroke length as against the earlier two in the 1916 model. The head was geared at 3.2 to 1.

There were also a number of small design changes throughout the life of the model and variations can be found in the wind wheel and the anti swivel design which changed in May 1918. The model continued in production until at least 1940.