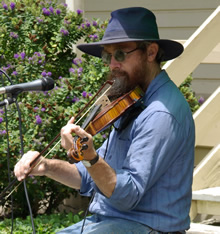 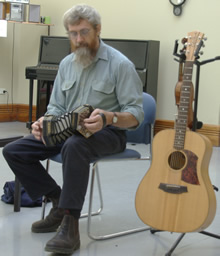 on concertina at Goulburn Conservatorium 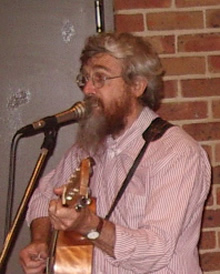 David completed his bush music apprenticeship at the Sydney based Bush Music Club. Strongly influenced in the song, dance and poetry traditions by the likes of Jamie Carlin, Barry Collerson, John Dengate, Ralph Pride, and Bob Bolton, David worked with a number of bush bands including The Rouseabouts, The Reedy River Bushmen and Pinchgut, playing fiddle, guitar, banjo-mandolin and banjo. He established and led Southern Cross Bush Band for many years until the tree change to the Southern Highlands where he started his family band Paddys River Band

On the first Friday of the month David leads a Bush Music Session at the Goulburn Club. Each month has a theme for songs and poems to challenge players, and collected tunes from south-eastern NSW are featured.

Since 1983 he has led the Heritage Ensemble as Musical Director and Conductor. The Ensemble is an annual confluence of the best bush musos in NSW. Together under the musical direction of David they provide the quality bush orchestra sound for the Heritage Ball put on annually by the Bush Music Club. In April 2015 the Ensemble also played for the main ball at the National Folk Festival in Canberra.

A lineup with Canberra musicians Ray Mulligan and Peter Percival and long term music mate Ralph Pride from Goulburn has been established under the name FolkLines to play for bush dances in Canberra and Sydney.

Recent involvement with Bush Traditions Inc has seen David programming the Bundanoon DanceFest and supporting the annual Bush Trad Gathering . With Ray Mulligan and others, he has been presenting Australian collected tunes sessions at the National Folk Festival as well as leading the National Festival Bush Orchestra.

David is to be found at a Local Session at the Bundanoon Club on the 2nd and 4th Wednesday evenings.

Recording with Ray Mulligan in 2012