The Windmill @ The Laurels 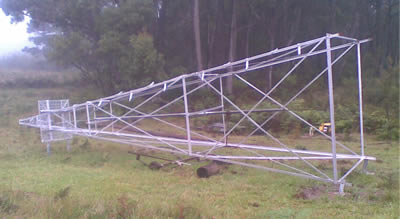 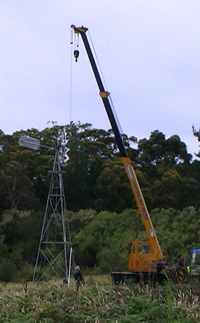 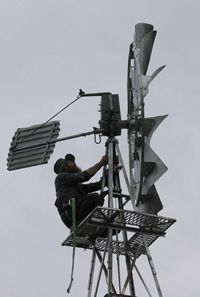 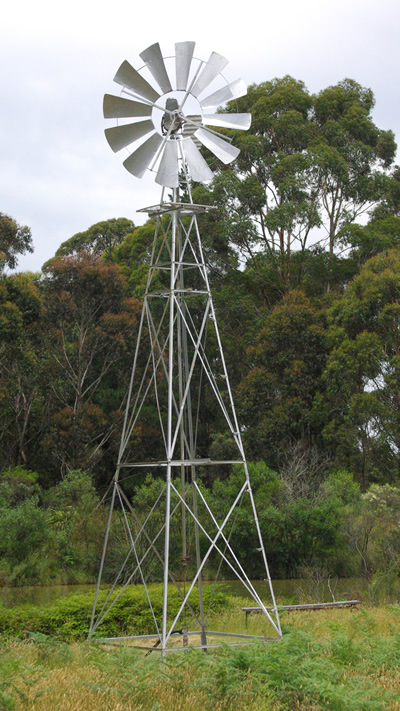 When my neighbour Lutz was selling up his apple orchard next door he offered me the old windmill he had in pieces on the ground. It was a sorry sight. The frame was twisted and the fan was buckled from what must have been a dramatic collapse. But he assured me that all the bits needed to assemble it were there. It was free. It was old fashioned machinery. It was a challenge. I was hooked on all counts!

Some internet sleuthing on the maker Alston and the model 27 found this historical background.

Then came the tasks of repairing, reconditioning, assembling! The "head" is the gearbox mechanism that converts the rotation of the "fan" into the vertical motion needed by the pump. I pulled the head to pieces and worked out how it worked. With no manual it took a bit of time but I found everything workable except he spindles that the twin gears ran on. They were badly worn so I had some new ones made by a machine shop in Moss Vale. Then reassembled it hung in the shed (in an inconvenient spot) for the next eight years.

The pump was worked on next. With the main problem to be solved being how to seal the drive shaft to be able to pump to a distant uphill tank. As it turns out the spindle seal around a 2" gate cock was just the right size and the threads fitted like a charm. I made up some graphite grease and made an old fashioned jute and grease seal. This will need regular maintenance in the working machine. Time passes. Three more years.

The tower was twisted in the lower sections so these were rebuilt with a heavier gauge angle iron on the legs and assembled, horizontally of course. The maintenance platform was rebuilt with wood and then revised with an expanded steel mesh welded into an angle iron frame. I'd rather not take the risk of discovering rotted wood when 20 foot above the ground. An undercoat and a finishing coat of silver paint.

So with all the components ready 2011 was declared to be the Year of the Windmill! It will be done! Unkind jokes from sons about 'not being able to get it up' and ' he's got an erection problem' spurred me on.

February saw James (my eldest) and I hook up the auger to the faithful Fergie. We drilled out and widened holes for the windmill footings to specs based on my calculations of the lifting forces applied in a gale. Then the leg supports, made of 50mm angle iron with welded cross pieces, were placed in the holes and the lower part of the tower bolted on. After careful levelling the leg supports were concreted in place. Three weeks later the bolts were undone except the two pivot bolts, and the tower swung to ground level to have the top of the tower bolted on.

Meanwhile the head languished in the shed strung up to a roof support. Enter Ray Shiels from Goulburn and after a bit of discussion it was decided that I had reassembled the tail with the main support rotated 180 degrees. We fixed that and the enthusiasm levels went up again.

James and I positioned and secured the pump centrally and installed the inlet and outlet pipes. For a while James, and his friend, Tristan, and I had considered ways of lifting the windmill with people power, however with James going overseas at the end of November that meant postponing till 2012. No way! A phone call to crane operator Bruce Hayes in Mittagong and it was booked. A friend Richard Officer, with some experience in windmills came around on the day and we attached the head, fan and tail. The crane lifted the whole caboodle and swung it into place. Bolts fitted and tightened and the crane left. The Richard and I connected the drive shaft, reefing cable and lever. Oil was poured into the sump and the covers clipped and screwed. The wind was thoughtfully subdued while all this went on and picked up when we were ready for testing. After self priming the pump was delivering a measured 450ml per stroke.

November 29th and the Windmill was UP and pumping into a holding tank for gravity feeding to various plantings on the property.

Update after several years of operation.